Jane Romanishko is not only a great painter but she has a fascinating personal life story to tell.

Jane was born in Siberia and she was introduced to art when she attended, the Ossinki art school, with her good friend. Her best friend wanted to become an artist, so it seemed like the right place for her to be at the time.  When Jane reflects on the experience, she says, "The truth is, there was an artist within me waiting to come out."  Looking back on the experience, she admits that the school provided her with a solid grounding in art basics, which has followed her  throughout her lifetime.  Jane also adds to her formal education, what she learned from personal reading and study.  "My greatest teachers were books and artworks from the contemporary artists Harley Brown and Richard Schmid."

Jane left the Ossinki art school, at the age of 15 to attend a College of Art Education. She entered  the teacher training programme. But her life took a different turn when she went from there to an architectural university.  She moved from there to  Estonia where she gave birth to her daughter Paulina.  When Paulina was 2 years old she moved to the States, and from there to Canada.

Interestingly, Jane says that she didn't particularly realize when she was young that she had a gift for art. It sort of evolved as part of her educational background.  Even though Jane had acquired her architectural degree her heart wasn't leading her that way. The closest she came to architecture was her work as a  freelance illustrator for a Calgary architectural company. 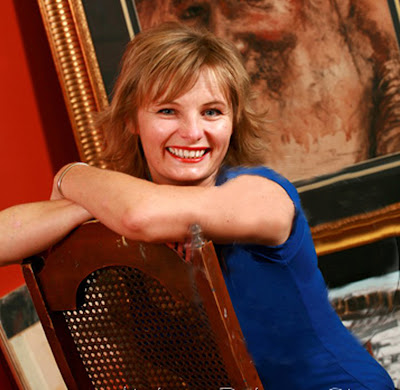 Jane's transition into Canadian life, came from the bottom up, where she worked at  a variety of entrance level jobs. " In one of my early jobs when I was a housecleaner, I became good friends with the family and they were great supporters of mine, and they count among the first to buy my paintings."  They
knew a good thing when they saw it!

When Jane turned 35 years of age, she heard her life call as a painter and she followed its voice.  She knew that this was what was meant for her to be..  She says that it was so natural that it seemed that when it poured from her onto paper and canvas, that someone else was using her hands to create.  What a wonderful way to describe her liberated spirit!

Jane is at her best when she paints portraits of people and animals. And when she really thinks about it, she says that it seems strange but its true, that "as an artist, you work the first 20 years for your name, and the following 20 years your name works for you". Well said.

When Jane looks back over her years in Canada, she says, "We have travelled a lot in the last few years. My partner Dallas is a professional photographer and we have travelled throughout the world - usually off the beaten track. We like meeting everyday people like farmers and fishermen. Its fun to talk to them when you don't know the language." There is a lot of gesticulating and strange movements. "We plan on going to India for six months at some time in the future."

Her daughter Paulina has grow up now and is in her 3rd year of university, where she is studying Asian studies and linguistics, and learning Japanese at university in Kyoto, Japan.

Its interesting how life works things out.  Jane's education in teaching and art, has paid off.  She founded a small art school in Airdrie (near Calgary), but after a number of years had passed she feels a stronger desire to paint and not to teach.  But even at that, she found the time to set up an art retreat. This one is about 160 km from Peurto Vallarta Mexico, near old port San Blas.

Her school will open for its first workshop in February 2013.  Its in an absolutely, idyllic setting overlooking the ocean on one saide, and the mountains and jungles on the other. Jane says: "We hope to have great teachers come and share their knowledge with  students from all over the world. It also will be open to artists who would like just to come and stay and create there."

Jane is a remarkably artistic woman. When she arrived in The States, she says that nobody could pronounce her name. (Zheenya), so she decided that she would be called Jane, after her favourite literary character Jane Ayre.  What a romantic! It wasn't long  before she heard the expression, "plain Jane."  But anyone who knows Jane with her colourful personality and her Russian accent, would definitely not think of her as plain Jane. She's anything but and her paintings and life attest to that!    Jane invites you to drop by her website to check out her work. Please click here.