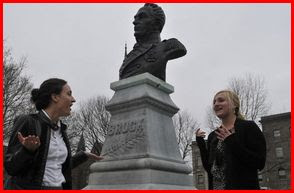 DEREK GORDANIER The Recorder and Times Brockville's Marie Barnett, left, and Katie Pagnello of Addison discuss what should happen if the city's well-known bust of its namesake War of 1812 hero Sir Isaac Brock turns out to be inaccurate. A Canadian artist has announced he will unveil later this year a "forensic facial reconstruction" of what he believes Brock really looked like in life.
Source: The Recorder & Times Online. Please click here to read the complete article.

Well, it seems that  artist Christian Corbet who is preparing to make a statue of Sir Isaac, thinks that sculptor Hamilton McCarthy, who created the above statue, took creative liberties.

This article takes the reader into the intriguing  research, Christian Corbet took to create a legitimate replicate of Brock's features.
Posted by Fredericks at 12:00 a.m.