Karen Bailey, Art from the Canadian Military Campaign in Afghanistan 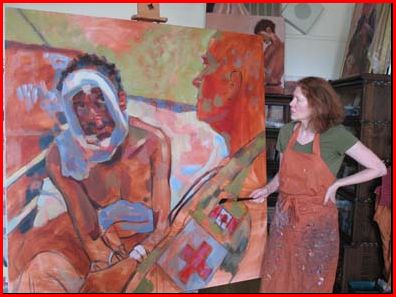 This painting captured Karen at work on her Afghanistan painting: "Shotgun Victim."
Posted by Fredericks at 12:00 a.m. No comments: 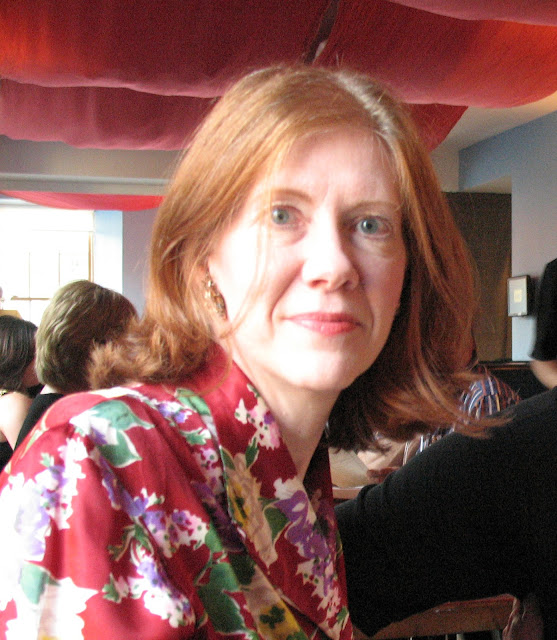 As Karen and I ventured into the process of creating her life story for 'The Portrait', she was forthright in revealing to me, what drives her onward as an  artist. Her unabashed statement, "I paint people" brought many questions  to mind.

Let's begin with her official painting of Michaelle Jean. Can you imagine, anyone but Michaelle Jean, hanging an  official portrait of herself in  Rideau Hall : A painting which includes 19 figures, and a dog? A wonderful work  that captures the spirit of  our  former Governor General, Michaelle Jean.

In one respect there should be no surprise for Michaelle was indeed, a Governor General, of and for the  people.  And when she ended her term of office, there was a lot of pressure exerted upon the Government to invite her back to serve for another term.

Karen was born and raised in Ottawa. and her solid family bonds gave her the strength and spirit to travel to England to further her Heraldic education  Her years in England, were wonderful  years in which she fell under the influencing spell of such artists as

Karen graduated with honours in 1981 and in that same year she exhibited her heraldic art at The Victoria and Albert Museum in London. Karen's experience in Heraldic art peaked with her receiving the prestigious Elizabeth Greenshields Foundation grant for drawing and painting.

During her stay in England, Karen worked and lived in Ireland for about half of each year. These were three productive years and they provided her with  some great free lancing experiences. Karen says of her life in Dublin; "It was there that I made contact with the publishing company Appletree Press (based in Belfast) and began illustrating a series of books for them (Irish Family Names, Irish Proverbs, Irish  Toasts, A little Irish Cookbook, A Little Scottish Cookbook, A Little American Cookbook and a Little Canadian Cookbook. Not just that, but she also did freelance calligraphic work for the Irish Department of Public Works and private companies.   Karen says, "I, also produced on my own, a series of  architectural drawings of Irish shop fronts for exhibition in Ottawa."

Ever since those first years, Karen has dedicated her professional life to art. She works today out of a shared Ottawa studio called the Rectory Art House, which is three blocks from where she lives with her husband Iain Main.

'Karen's life near the Rectory, provided more opportunities for her artistic development: "My husband and I were involved in starting a non-profit housing cooperative in a heritage apartment building, The Shefford, in Ottawa 1988-92. It was at The Shefford Apartments that I first met Miss Marjorie Isabel Gray and formed a friendship. She passed away in 2005 at age 94. In 2006, I began to paint the “Marjorie” series in an attempt to remember a woman who might otherwise be forgotten."

Karen was later accepted by The Canadian Forces Artists Programme (CFAP) to travel to Afghanistan to be a combat artist. She spent a lot of time there with Canadian military nurses, at Role 3 Hospital in Kandahar. Karen brought with her a well established family background.  Her grandmother served as a nurse with the American Red Cross in Italy during WW2 and her mother trained and worked as a nurse. Karen applied to the programme because she wanted to paint "behind the scenes people.

Karen says; "I didn't inherit the medical gene but I am able to tell the stories of military nurses, medical technicians and doctors through my  art."

When Karen searched for the story behind the story she says: "I felt strongly that the nurses and medical technicians working at the Role 3 Hospital in Kandahar should be recognized for their dedication and tireless efforts to heal the wounded and dying. Karen's background as a court room artist, helped her develop the craft of drawing quickly and accurately. This proved invaluable when working in challenging hospital situations.

Karen has an inclusive attitude towards art. While many of us may wish to have our life stories told with a visual representation- "it is not only the wealthy, famous, or young who should be depicted in portrait form." Karen befriended an elderly lady named, Miss Marjorie Isabel Gray, whom she met while living at the Shefford Apartments, in the non-profit housing cooperative in a heritage apartment building in Ottawa. Marjorie passed away at the age of 94.  Karen turned her friendship with Miss Gray into a rare life opportunity to create a series of paintings - of a woman whom Karen says "might have otherwise been forgotten."

An overview of her life provides Karen with the rich memory of her mother's work for church teas. "I have empathy with the church tea ladies." says Karen. "Part of my personal history can be found in this milieu having observed my mother's participation over the decades. Our culture does not acknowledge the contribution these women in their seventies, eighties and nineties make; they have become invisible and their work is often taken for granted." You are invited to visit her website by clicking this link.
Posted by Fredericks at 12:00 a.m. No comments:

Taken at the unveiling of the public display of 'The Official Painting of Governor General, Michaelle Jean (right). Governor General David Lloyd Johnston (far left) standing beside him is its creating artist, Karen Bailey. The painting has found a place of honour in Rideau Hall.
Posted by Fredericks at 10:14 a.m. No comments: 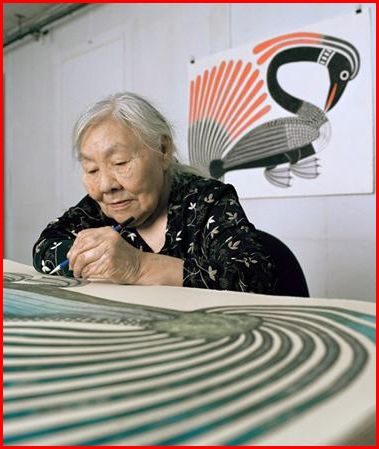