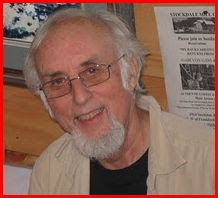 
Frederick is an artist, who paints under the nom de plume "Fredericks". He is a graduate of York University and has lived in Europe where he personally researched some of Europe's great artworks.

He has edited and produced award winning newsletters and been published in a number of magazines.  Frederick is a born communicator. He has given presentations to over 30 clubs and groups and has been a keynote speaker at a national convention.

Frederick began 'The Portrait' by profiling the works of a handful of his favourite artists and it went from there.  As a painter, his works can be found in private collections in England, the States, Canada and Barbados.  He divides his year between his home east of Peterborough, On., Golden BC, and Mound Standfast, Barbados. 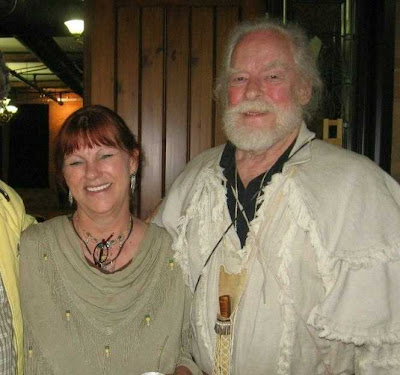 Maureen Bayliss,  ''Portrait' editor.
Maureen (Mo) Bayliss, is what Frederick calls, the "right hand" woman behind the scenes who helps steer 'The Portrait' along its path with her excellent editing skills and her collaborative advice.  Maureen is seen in the above picture with artist and author, James Alexander Thom.

Maureen is one of those rare people with a multiplication of skills. She is an  accountant, an archaelogist, a historian,  an artist, and an experienced editor for a couple of online publications - and these are just a few of her life talents.

Maureen practices a rare form of art - she makes her own paints from natural earth colours and she applies this to her native art style.. Its back to basics at its best. 'Mo' makes her home in Tottenham, Ontario.

Please click here and here  to read more about Mo and her skills as an artist.