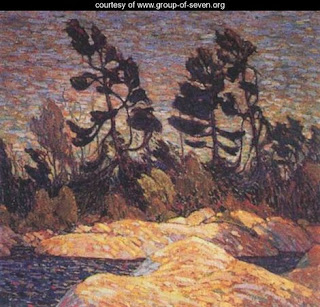 Long before the Group of Seven came into vogue, the Montrealer assembled a collection of their work, for a relative pittance.

She bought Lawren Harris paintings for as little as $85, A.Y. Jacksons for the same amount and at least one Arthur Lismer painting for the princely sum of $37.50.

The $85 painting she bought from Harris in 1947, Lake Superior Sketch XXXIII, is expected to bring $200,000 to $300,000 at the Heffel Auction of Fine Canadian Art tomorrow at the Vancouver Convention Centre.

"She amassed a great collection with a total [cost] of $17,000 to $18,000," marvels David Heffel, who runs the auction house with his brother Robert. "It's in the millions now. It was a great investment."

Thornton died last Oct. 27, aged 93, and her collection has been put up for auction by her estate.

Excerpt of an article from the Victoria Times Colonist(May 25, 2010) and reprinted on the Heffel.Com website.
Click here.
Posted by Fredericks at 12:00 a.m.