The Art of Brian Simons 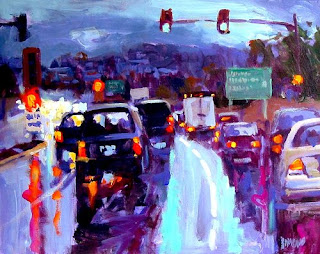 I found it interesting to read Brian Simon's biography on the blog immediately below, that he was influenced by the Group of Seven. The Group for the most part had Wordsworth's sense of rebellion against urbanity. William fled to the lake district of England to write his poetry and the Group of Seven fled to the forests and rural countryside . Brian's 'Slippery When Wet,' is impressionistic and loosely painted much as many of the paintings done by 'The Group'. The big difference being in the kind of settings they both sought to represent in their works.

We've all seen this this work painted as a 19th century Parisian or London street scene with horses and carriages. But Brian moves the hand of the clock up a century or so and captures a scene familiar to every urban 21st century driver.

Brian's comfort with acrylics is evident. His paint flows in loose, flowing lines as he captures the essence of this wet city street in heavy rain. This work is loaded with atmosphere and you can almost imagine hearing the traffic report on your car radio as the wipers slap out a rhythm to clear away the rain.

It makes me glad to think that my commuting days are behind me
Posted by Fredericks at 12:00 a.m.