Nude in a Landscape by Edwin Holgate 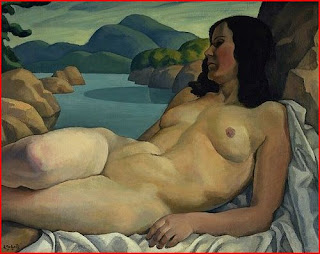 Nude in a Landscape was painted by Montreal artist Edwin Holgate. Montreal artists had a greater sense of liberation when it came to painting nudes then did their compatriats in Toronto. The above work was done in 1930 and it would have created quite a stir had it been painted at that time in Toronto - or at least publicly shown in 'Toronto The Good'. But it wasn't.

The website, Cybermuse, reports that Hogate had been invited by AY Jackson to join the Group of Seven, but he chose not to join.

A.Y. Jackson first approached Edwin Holgate about joining the Group of Seven in 1926 during their trip to the Skeena River, 12 though he was not actually invited to become a member until 1930. While not a reluctant member of the Group, 13 Holgate did recognize its limitations. The Group's concentration on landscape, he felt, left little room for the figurative work that interested him. Moreover, Holgate's formal interests were quite different from those of the rest of the Group.

'Nude in a Landscape,' has some interesting characteristics. Firstly this is a picture within a picture. There are two pictures here. There is the landscape, and the nude, and both of these separate entities within the work play off each other.

Holgate makes his nude a part of the Canadian Shield by making her curves, mounds and contours a natural extension of the landscape. The colours of the rocks on the left are picked up by the hues of the her upper body and and she is postured in such a way for the contours of her body to provide a visual pathway for the eye to travel into the landscape.

There is an essential contradiction here. While the curves of the sitter's body gives us a route into the work, the nude's face and eyes look across the painting, and not specifically into it. Its not surprising as we look more closely at the nude, to see that she has no interest in hills, rocks and trees. She has other things on her mind.

Lets take a look at the tonal values of the nude. The lighter tones give way to the darker upper shadows which push her face into the background. Is this a morality statement? Is there a dark inner secret? Most certainly she gives the impression of spent passion. Her foreground arm and her face are flushed.

The language of shapes give rise to human emotions. For instance, the rolling hills of the langscape inspire gentle emotional responses. As we move down the painting, we find that the sheet below the nude is crinkled into a network of lines and fragmented shapes which a create a more emotional response.

Email ThisBlogThis!Share to TwitterShare to FacebookShare to Pinterest
Labels: Nude in a Landscape