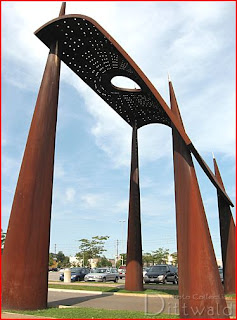 Nowhere to stand in the rain? This work was created by sculptor, John McEwen, who was presented with an honourary degree in 2008. Read about this man's accomplished life, below.

Sculptor John McEwen Receives Honorary Degree at 2007 Fall Convocation
For his substantial, enduring contributions to Canadian arts and the cultural ecology and quality of life in communities in Canada and beyond, The University of Lethbridge is proud confer upon sculptor John McEwen the degree of Doctor of Fine Arts at the 2007 Fall Convocation ceremony on October 13.

Through large-scale public works and small-scale private works, John McEwen�s sculptures have made significant contributions to Canadian arts and have furthered the appreciation of art in Canadian communities and beyond.

Born in Toronto, John McEwen studied at the Ontario College of Art. After his graduation, he and some friends began a gallery called A Space. A year later he worked for a veterinarian in Cookstown, and made some sculptures from cow hide, showing some of them in an exhibition.

Deciding that he wanted to sculpt in steel, in 1972 John McEwen bought an old blacksmith shop in Hillside, Ontario, learned welding skills at George Brown College in Toronto, and taught himself blacksmithing skills. A friend of his, a blacksmith, later rented the front part of the shop, which had become known as Hillside Iron Works.

An artist with persistent vision, John McEwen�s evocative, critically-acclaimed body of work depicts large-scale objects of steel, bronze, or stone, embodying complex, interwoven themes of communication, transportation, and Canadian cultural history. His sculpture reveals many themes associated with the Canadian experience including, as he says, �the idea that culture and ecology are inextricably linked.� John McEwen�s work often uses animal forms, especially dogs, in an exploration of what animals represent to humans.

His striking large-scale sculptures have been installed across Canada and the United States. Examples of his work in Alberta include the sculpture Western Channel, a notable and essential part of the exterior of the U of L�s University Centre for the Arts; Horn and Weaving Fence, which graces the front plaza of the TransCanada Pipelines building in Calgary; and the complex piece One and One, on display in the Southern Alberta Art Gallery.

Outside Alberta, John McEwen�s work has been installed in downtown Toronto; the harbour front, Toronto; the National Aviation Museum in Ottawa; and Queens, New York. John McEwen�s work has been featured in major national collections such as the McLaren Arts Centre in Barrie, Ontario and the McMichael Canadian Art Collection in Kleinberg, Ontario. Overseas, he has exhibited his work in France, Germany, Japan, and the U.K.

In addition to being an important Canadian artist, John McEwen is a respected educator who shares his insight with artists, students, and the public. He has taught at Ryerson Polytechnical Institute and the Ontario College of Art.