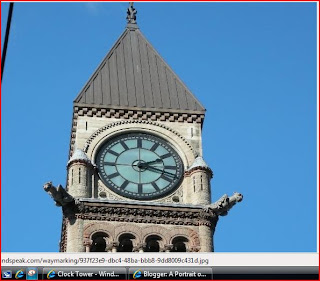 Regretably, I haven't had much success finding the gargoyles mentioned in the article below, (from the archives of Toronto's City Hall) so I captured a picture of the gargoyles from the old city hall clock tower. If any reader can locate pictures of the two gargoyles from the column below, I would be more then pleased to present them to our readers.

The Return of the Gargoyles

When Old City Hall opened in 1899, it contained two large (5 feet high) grotesques, located at the foot of the main staircase. These elaborate pieces of wrought iron, each in the form of a griffin or other mythical beast, were produced by the Toronto Fence and Ornamental Iron Works.

In an effort to return the works to the Toronto public domain, the Metropolitan Corporation bought the grotesques in the late 1980s. In commemoration of Old City Hall's 100th anniversary, the grotesques have been restored.
Posted by Fredericks at 12:00 a.m.