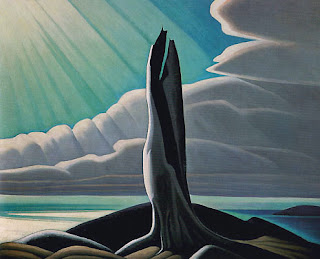 Thursday's CBC news reported that Lawren Harris's, Old Stump of Lake Superior, sold for $3.5 million dollars, making it the second highest selling picture in Canadian history. Interestingly, the picture was a sketch for his painting 'North Shore of Lake Superior.'

Harris's painting St. Patrick's Street Toronto recently sold for $2.8 million, and his 'Winter in the Northern Woods' sold for $1.4 million, in 2004. Prior to that, his painting 'Baffin Island', sold for $2.5 million, in 2001 making it, at that time, the most costly of the Group of Seven paintings.

The big dollar total for Harris's works cashes in at $11.2 million dollars.

And, now for the million dollar question.

"Who painted Canada's most expensive painting and how much did it sell for?"

Well, you can check the answer to that question in the Yahoo article linked below.

Click here to see the CBC's story on the sale.

To read the article on the North Shore sale, in Yahoo click here.
Posted by Fredericks at 12:00 a.m.